Claim was brought against corporation whose employee was operating vehicle rented by he employer while intoxicated and lawsuit was filed against the restaurant who violated south carolina’ s alcohol liability statutes by over serving the customer alochol and was subsequently involved in a fatal automobile collison. The customer and employee of the corporation, after being served 8 glasses of wine by the restaurant, drove the wrong way down the highway and collided head on into plaintiff’s vehicle seriously injuring the drive and most tragically, killing his 12 year old child. 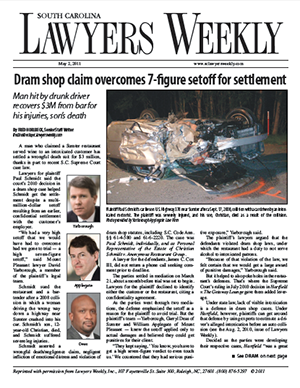 The at fault driver had a blood alcohol level of .21 and was senteced to 12 years in prison for felony dui. Evidence uncovered during discovery that the restaurant not only served its customer to the point of intoxication but they also failed call 911 in violation of company policy when they learned that the customer had staggered into the parking lot, run over a shrub, and drove drunk from the restaurant. The parents of the deceased child received three million dollars $3,000,000 from the wrongful death claim filed by the deas law firm and the father received $2,250,000.00 from the personal injury claim filed on his behalf for the injuries he sustained in said accident. The dram shop liability law suit filed against the restaurant by the deas law firm yielded an additional $3,000,000 on behalf of the deceased child’s parents. The total recovery for the parents was $8,250.000.

lawsuit filed against tractor trailer company and its driver who negligently made an illegal lane change on interstate 20 in gilbert, south carolina and as a result caused the driver of plaintiff’s vehicle to swerve to avoid a collison and violently strike the guardrail and caused the plaintff to suffer serious bodily injury including a fractured right arm, fractured right hip, a fractured left knee, and head contusions. As a result of the plaintiff’s permanent and life altering injuries the deas law firm through mediation secured a settlement on her behalf in the amount of $972,678.00.

lawsuit filed on behalf of plaintiff who was involved in an automobile accident where both driver’s claimed the other ran the red light. After coaching a middle school basketball game plaintiff left the school and traveled home on the same route he had traveled for 20 years in aiken county, south carolina.

The violent collision caused the plaintiff to suffer horrific injuries including traumatic brain injury, fractured ribs, fractured right shoulder, cerebral contusion, left eye abrasion, and he was in a coma for approximately 20 days before regaining consciousness. Liability in this matter was feverishly contested by the adverse driver who adamantly contended that he entered the intersection on the green light.

Despite the dispute as to liability and because of the plaintiff’s permanent brain injury and permanent physical impairments, the deas law firm through mediation secured a settlement on his behalf in the amount of $375,000.00.

This workers’ compensation claim stems from an accident on interstate 26 in Orangeburg county involving 2 tractor trailers. The claimant who was operating a tractor trailer exited from the off-ramp onto interstate 26 and was unable to see the other tractor trailer driver’s vehicle who had come to a complete stop due to stalled traffic and failed to activate his hazard lights or truck lights.

Consequently, the claimant collided into the rear of the parked tractor trailer causing significant property damage to both vehicles and causing the claimant to suffer severe and life threatening injuries including an orbital fracture, severe head contusion, and a traumatic brain injury. The claim was settled for a lump sum of $370,000.00 and the claimant was granted causally-related lifetime medical treatment for brain injury and other physical injuries stemming from the accident.

Our Mission is to Serve You